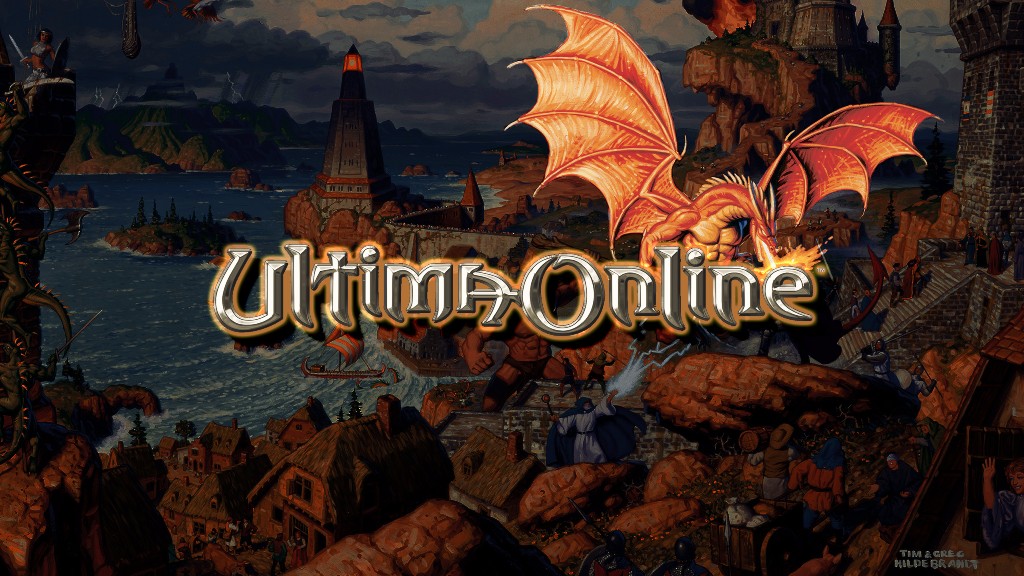 The UO Team is happy to announce we will be sending out a newsletter periodically so you can stay up to date on the latest in Britannia!

Please encourage your friends to sign up on our web site.

We are pleased to announce that Publish 94 is out the door and all of the in game systems including the Ultima Store, Character Transfers, and Promotional System have been turned back on as of this morning.

We are getting together a new schedule for the Dev Meet and Greets which will start back up in September. Stay tuned to UO.com and future newsletters for the updated schedule.

After an interesting meet and greet with Siege where the hot topic was VvV artifacts, we received a lot of feedback which we greatly appreciate. After reviewing the feedback, we have decided not to add VvV artifacts to Siege at this time. We will continue to gather information from the Siege players and review this decision at a later date.

We are working hard to get Publish 95 together. We hope to get it to you before Thanksgiving so that you can enjoy all the exciting new gifts and veteran rewards we are working on. I will give you a hint, one veteran reward is a creepy crawly mount! :smiley:

Kyronix and I have been invited to speak at SyndCon again this year and are are looking forward to speaking with all of the players from the oldest guild in online-gaming history. Congratulations to the Syndicate on maintaining this distinguished honor!

See you in Britannia,

One of the more common points of feedback we receive is regarding the Bulk Order Deed system. We've focused primarily on combat as we've fleshed out the Valley of Eodon since the release of Time of Legends, with a few bits of crafting sprinkled in here and there. With Publish 95 we are currently in the planning stages of a Bulk Order Deed update. In planning this update we are remaining true to the original intent of the Bulk Order Deed system while taking some of the randomness out of the reward delivery. While you will not be able to bank low end Bulk Order Deed turn-ins for higher tier rewards, we do plan on removing the randomness from the reward delivery so crafters can target the rewards they want the most without having to rely on the RNG. We're also looking at introducing new rewards and crafting systems to BODs. As we progress further with the update we look forward to your feedback on these new BOD changes.

To go along with the BOD update, we are also planning a community crafting event for the holiday season. We want to give crafters something to rally behind in order to fill some of those BODs that have been collecting dust, as well as earn some fun new rewards for getting in the holiday spirit!

Summer may be winding down, and planning for Publish 95 may be underway, but don't forget to check out all the updates that came with Publish 94 as some of those features become active in September and October!

With the release of Publish 94 we are happy to release the next installment of game fiction related to the continued exploration of the Valley of Eodon and its enchanted origins!

A thousand years ago, Eodon was lost.

Worldwalker Katalkotl held the torn scraps of his ceremonial tilma against his bleeding side. The warriors who had helped bring treasure, decadence, and human servants back to Eodon lay dead or dying around him, along with dozens of Myrmidex.

When a few Myrmidex had escaped captivity, the Kotl had believed that they controlled the only egg-laying queen and so the rogue insects posed no threat. Now the Myrmidex had returned, and in an initial raid, they had seized the Great Moonstone. Then, after cutting the Kotl off from the source of their most powerful magic, the Myrmidex systematically wiped out Kotl settlements and human resistance.

All attempts to quell the Myrmidex had failed. A newly-grown and modified insect queen was torn apart and consumed. The newest Kotl weapon, Zipactriotl, had driven the human servant fused to it insane, and the Kotl had been forced to abandon the project. Facing complete destruction and with no way to flee Eodon, the World-Builders had retreated to the underground sections of their great city. The Kotl had expected a long siege and planned to use the remaining time to find desperate new magics to combat the enemy. The Myrmidex did not grant such respite, sacrificing a million insects against Kotlan’s golem defenders.

Katalkotl kicked aside an oozing carapace to recover his weapon and headed toward the heart of the city. He needed to seal the Moon Chamber. It was the focal point for all Eodon’s mana, capable of opening moongates across the Ethereal Void. While dormant without the Great Moonstone, it was the only hope for the Great Work. If the few Kotl stranded on other worlds were ever to reclaim Eodon, Katalkotl needed to insure that the Myrmidex did not tear the Moon Chamber apart.

As he moved farther into the city, he heard the terrible screams as the Myrmidex onslaught moved through the human servants’ quarters. In the mayhem and ruin of the tunnels, he recognized the still forms of fallen friends and kin. Despite the cut of grief, he forced himself to push forward.

Narrowly avoiding a few Myrmidex patrols, Katalkotl came to the door of the Moon Chamber. It was guarded by the golden automaton, Yunapotli. A masterwork of Kotl golem-craft, Yunapotli was intelligent, strong, and loyal without fault. The tireless golem’s normally shiny exterior was coated in Myrmidex ichor.

Katalkotl spoke to the golem, “I will enter the chamber. Then you are to collapse this part of the tunnel.” The human-looking automaton considered for a moment before nodding slowly.

Katalkotl entered the Moon Chamber and looked up at the shimmering array of crystals and arcane geometry. Beyond being the threshold to other worlds, the Moon Chamber was an ethereal orrery and speaking history. He knew the Myrmidex could smell magic and would eventually find this place. They would dig through any amount of rubble to destroy it. He needed a scent that was more pungent to them.

He braced his weapon against the wall. This final part of Kotlan would not fall, no matter the sacrifice. Apologizing to those he had failed, Katalkotl fell on his spear. An illusionary construct of the Kotl, a monument to the Worldwalker, watched and remembered.

An hour later, a Myrmidex drone poked at a golden golem head with emerald eyes, making sure it posed no threat. It ran its antennae over the rubble briefly before moving further into the tunnels.

The first moving stone stirred a few nesting birds. An hour later, the second stone’s movement was noticed by a Barako tribesman who quickened his pace along the path. Each hour, another stone slid into a new position, carefully aligning the ruin to compensate for a different millennium.

By the end of the day, the stone surface started to glow and pulse, faster and faster. Arcs of mana burned away the jungle’s encroachment. On the other side of Eodon, a shaman of the line of Intanya woke up screaming.

Kotlan, the City of the World-Builders, was open.

1. Can you add recalling to Ilshenar?

No we are not going to be adding recalling to Ilshenar but we are talking about adding a crystal portal to the game similar to the one already in the game for Eodon. After we have made a final decision we will let you know.

2. Will we ever be able to bless lanterns?

Yes, we are adding that to the system. We see no reason they should not be blessed.

3. Can we have a house search to be able to locate all the items in my house?

We sat down with Bleak and talked about this, from an engineering perspective the amount of strain it would put on the server to store all housing data is not feasible at this time.

4 Will we ever have the option to enlarge the Classic Client screen?

You will be happy to know that Bleak is doing research to see if we can't do just that. We will keep you updated on the progress he makes.

5. Can we turn off the randomization of resources?

As a team we discussed this, and have some updates to the BOD system that will address the availability of higher end resources for crafters. At this time we are holding off on making a decision on resource randomization until we see how the BOD changes roll out in Publish 95. We look forward to more feedback on this feature.

1. If you have an account that was terminated by CS over a year ago and would like to have it back please contact support here and give them the details and identify the account as yours, depending on the termination we will remove the restriction from your account so you may open it again.

2. All Sovereigns purchased from Origin have to be entered on the Account Management page. You can not enter these in game.

3. Anyone that is trying to reopen an account please make sure you send all the information to [email protected] so we can have a record of this. In the original request to support if you do not know your secret word please ask for a hint. Give them all the information to identify the account as yours so there will not be a lot of delays.

4. Anyone that does not get their codes from Origin please follow this link to resolve the issue..

5. If you have any in game questions or issues please either page in game or email [email protected]

6. For any feedback to content put in game please send it to [email protected]

Recently some of the player base may have noticed that an Origin store purchase they have made did not arrive or complete as expected. A confirmation or code email has not been received and you are wondering what may have occurred with your order. The Origin store enacts reviews on all transactions to safeguard against fraudulent purchases, and these reviews may take up to 72 hours. Unfortunately our Billing department is not able to expedite or circumvent this process, however players who have questions or concerns regarding a store purchase can contact Origin support for assistance using the below link: [1]

When prompted for a product, choose Origin. Next choose your platform, and select ‘Orders’ as the topic. You can further specify your issue in the subsequent fields before speaking with an agent.

We would also like to reiterate that the Origin store is the only guaranteed provider of codes for Ultima Online. The validity of a code purchased from a third-party seller (be it a friend, in-game acquaintance, or recommended site) cannot be guaranteed. Furthermore, any codes we find to have be fraudulently obtained will be disabled and an account that applies any of these codes will have that code removed from said account. This can result in the loss of gametime, character slots, expansion access, Sovereigns (and the items purchased with them), in-game items and more. Please be advised that we cannot assist with any issues stemming from codes purchased via non-Origin means; you will be required to contact the vendor from which you purchased the code for further assistance.