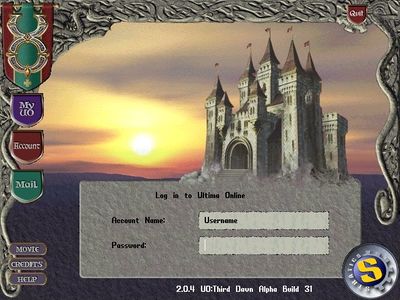 We are pleased to announce the start of alpha testing for Ultima Online: Third Dawn! Players participating in the alpha testing phase will begin receiving their CDs and testing instructions in the next several days and are free to log in and start testing as soon as they've received their CDs. Additionally, a new shard named "Alpha 3rd Dawn" will be appearing in the shard listing. This shard is open to all players, but only those with the Third Dawn alpha client will be able to access the new lands through the moongates of Britannia on this shard. The Third Dawn client may be used with any Ultima Online shard, but the new land of Ilshenar is only available on the Alpha 3rd Dawn shard.

As a reminder, this is an alpha testing phase, and as such, we ask that participants keep in mind the known issues list. This list will appear as an in-game message, as a file titled "readme3d.txt" in your Third Dawn directory, and on the Third Dawn bug reporting message board. In addition to known issues, there may also be significant changes made to the game during this phase, and some of the changes may require substantial file downloads - including an approximate 25 megabyte patch download to Third Dawn following installation of the alpha CD. While we will do our best to avoid patches of this size in the future, alpha testers should be aware of the possibility of significant patching. Finally, alpha testers should pay close attention to the Third Dawn bug reporting message board and the "readme3d.txt" file for detailed instructions from the Quality Assurance team explaining the current testing focus and instructions for bug submissions.

During the Third Dawn testing stages, the game is not supported by EA technical or customer support. Game issues that are considered bugs should only be directed to the Third Dawn bug reporting message board. This message board will open to the public on Friday, December 22nd, and can be accessed from the UO Message Boards at http://boards.uo.com.

We appreciate the effort of all of our testers during this early stage of alpha testing and we look forward to sharing the new look of Ultima Online with all of our fans.