This Access To The Mainland Is Vital... Do Not Fail!

Other items with this same name are listed at This Access To The Mainland Is Vital... Do Not Fail!.

In a surprising move last week, the pirates of Buccaneer's Den staged a few brief, and ineffective, attacks on the mainland. Though at first fearing a dread new threat to our well-being, it was quickly determined that the forces of pirates attempting to ravage the countryside were a mere diversion. The forces were, by and large, far too small, ill trained, and unorganized to be any genuine threat.

They did, however, draw attention away from the true objective of the Buccaneer's Den inhabitants - the construction of a teleporter from Buccaneer's Den to the Mainland and back.Built off of the road near Vesper, the teleporter will send ye instantly to the shores of Buccaneer's Den. A teleporter on the island will return ye to the mainland.

Reactions to the teleporter were mixed:

“I don' need no pirates comin' after me gold. We've enough thieves 'ere already,” a farmer near Minoc told me.

“Them pirate lads are so cute and usually have some gold to spend,” said a barmaid from Vesper.

A guard from Yew had this to say, “I think it will aid in the capture of wanted criminals. We will have easy transport to their island and yet can save the gold we would normally spend on mages or ship upkeep. I suppose we'll need to be a bit more vigilant, but I must say, I'm not afraid of any pirates!”

When asked why they just don't destroy the gates, the Captain of the Vesper guard, Stern Bludgin, replied, “ 'Twould be easy enough to remove, but my feeling is that they would simply build another somewhere more secretive. As it is, we shall have no trouble keeping an eye on this one.”

A spokesman from Buccaneer's Den, Crinn Sanjole, offered these words, “As an ex-thief from the Vesper and Minoc area, I understand thy concerns, but I assure ye... we mean no harm. Admittedly, there will be those who will use the 'porters for their own gain, but the citizens of Buccaneer's Den hope to establish trade with the mainland. Honest trade, even. To this end, we have gone as far as adding a bank of sorts here in the Den. Splint Crackknee, our new banker, may walk strangely, but we may all trust him to keep our valuables safe.” 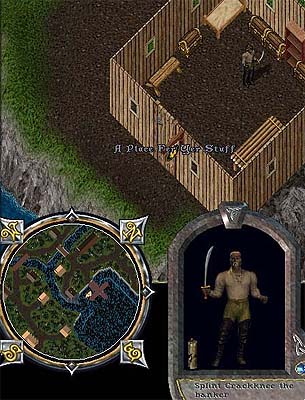 While Crinn seemed sincere enough, I couldn't help but notice him eyeing my coin purse quite often as we spoke. I for one shall reserve judgement on these new developments, but I also intend to keep a more watchful eye on my gold.