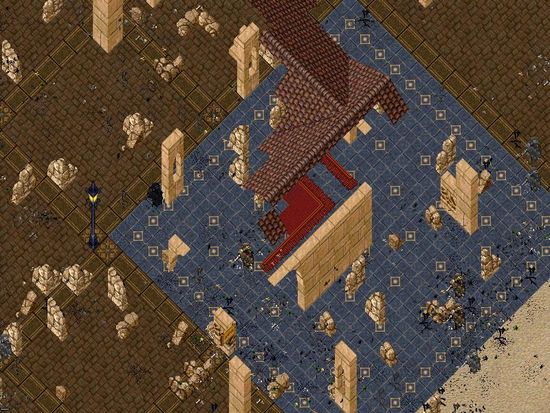 During a global event in November 2007, Magincia was invaded by daemons. The city was destroyed; all that remained were pieces of rubble.

Many rubbles use graphics which are otherwise unavailable in the game.  They vary in weight, randomly, from 10 stones to 100 stones.  1 stone pieces also exist.  Some types of rubble are very common, some are extremely rare, and a few may even be unique.

During the event, Light Daemons appeared which, when fought, would cast destructive fire attacks, similar to a supernova potion explosion.  Anything caught within an 8 tile radius had a chance to spawn as rubble.  Plants, mushrooms, and other debris could spawn also in burned form, thus giving multiple shades of those rubble types.

Of special note are the old Magicina docks, with special decoration that was added for this event arc. The dock area was not intended to be able to be destroyed, however, on the first day of the event the docks were indeed destroyed, and rubbles were created. On the second day, the docks had been restored, and no rubbles no longer were generated in that area. This included the boat parts, dock parts, both types of rope, bloody water, anchor, hanging tunic, hanging legs, 4-connected jars, fish, cannon ball, stack of cannon balls, and two types of bed, as visible in this image of the area:

In December of 2007, the Magincia Invasion event reached its finale. The moongate, in each facet, was damaged. It was surrounded by nameless black pillars, with Rift Guardians perched on top.  Then the battle began...  ...and some few players quickly also noticed that the nameless black pillars could be taken.  These black pillars have generally come to be known as 'Rift Pillars', though they show no name when moused over.

With Publish 56, on October 29, 2008, three new quests were added - a quest for Threads of Fate, a quest for Threads of Life, and a quest for Threads of Thought. (These quests are no longer active.)  The goal of the quests was to, "help heal the land by releasing the spirits trapped in Magincia’s ruins."  The publish notes stated that, "quest rewards are three types of rubble, one for each quest (total of 12 pieces)," and that, "rubble rewards are all unique - they do not overlap craftables or Magincia Invasion rubble".  (This was true for 10 of the 12 new pieces; the moongate granite and the square-shaped boulder were also made available during the original event.) Each of the three quests could be done only once per character.  These new rubbles also were much lighter than most original rubbles, weighing 10 to 19 stones, rather than the generally far heavier rubbles from the original event.

Nelson asks you to find the Corrupted Souls, free them by any means necessary, and gather the threads that they leave behind.

Nelson asks you to speak to the Restless Souls, to help them move onward, and to bring him the threads that they leave behind.

Nelson says that the Forsaken Souls have become listless and desperate to find a way home. He asks you to convince them to move on, and to bring him the threads that they leave behind.

After the New Magincia housing lottery, players moved into the new housing plots on the island.  But very quickly, a bug was discovered.  Rubble locked down in these new houses was disappearing.  It seemed that the timer for the event was still running; any rubbles in New Magincia would disappear each time the timer ran out...  even though these were locked down, and the event was long over.  Many players lost large collections.  The devs eventually agreed to try to make things right for these players, and replaced at least some of the rubbles.  However, there were some issues.  The replacement pieces were not always the ones which had been lost, and they were created with a weight of only 1 stone.  At least one of the replacement pieces was a plant type which had never been generated as rubble during the event.  Any 1 stone non-stackable piece of rubble is one of these replacement pieces.

Promathia had among the worst losses of rubbles.  Because there could be no way to know how much and what types of rubbles he lost, the dev team instead eventually gave him a unique memorial item named In Memory Of All The Lost Rubble Of Magincia.

In March of 2009, the last rubble-creating event (to date) occurred. Royal Thaumaturgist Clainin was hiding out at the Trinsic Training Hall in Felucca. Shortly after he was found, the Shadowlords attacked. Then Melissa appeared. As reported by the UOHerald,

"I see that my lackies have failed me! But what is this? The followers of Minax killing Clanin? *claps* Oh how perfect! Stand back! Let me have the death blow! 'Tis the best!"

As we stood by in shock, Melissa pulled a pitch black dagger from her cloak and plunged it again and again into Clanin.

"Wait, she is a follower of the true Shadowlords! Sieze her!" a shout came from one of our guild.

We surged forward, only to fall back again as Melissa screamed, "You have done the work my minions could not, and I thank you! But now, you must burn, with all the evidence of what has happened here!"

Her hands began to glow a burning orange-red and we knew it was flee or die. We all turned to the door, jostling against one another in our rush to get away. Most made it safely to the stairwell, but a few were still in the room when the first explosion came and fell, badly injured or dead. The walls began to crumble and debris flew around us. A second explosion sounded and rubble fell to the floor as the room smoldered...

After the smoke cleared, the faction version of Clainin's spellbook (not the Community Collection reward) popped into the backpacks of some players. Additionally, some of the Royal Guard were killed by the blast (different numbers on each shard, but theoretically as many as 10 per shard). Those corpses carried a uniquely hued grey halibard (darker than shadow iron, but lighter than the true black revenant halibards) and dark purple sash:

Finally, much of the room was blown up, which generated several new rubbles. These newer rubbles weigh anywhere from 4 to 100 stones.